This section is dedicated to all the Georgia Swimmers who participate in the Annual Georgia Grand Prix.

Results throughout the season will be tracked here and you can follow along and track your position after each event.  Soooo... get your entries in and good luck.

2012 marked the second year of the Georgia Championship Series. The Series consists of one short course yards meet, one long course meet, one short course meters meet and a choice of two open water swim. In 2012, the Rainbow Trout Spring meet opened the Series, with the Classic City Long Course meet coming next. We also added the Eric Chanteau Swim For You Life Challenge as an extra open water event, since the Georgia State Games was not sanctioned in 2012. We then ended the year with the St. Nick’s meet. The age group winners are:

Congratulations to all the winners as well as the 384 swimmers that competed in one of the 4 Georgia Championship Events in 2012. 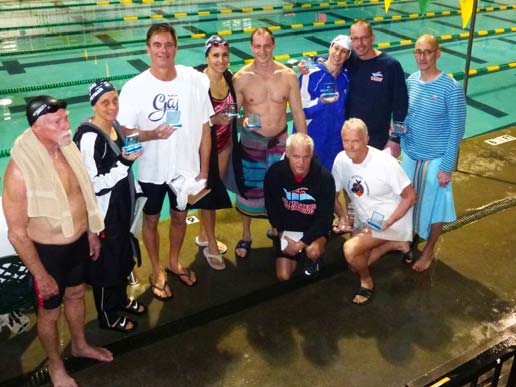 With the resolution at our recent Annual meeting to have our big events titled as “State Championships”
in 2011, we have decided to modify the Grand Prix for this coming year to include those events.
Tentatively, these events would be:

Thanks to our Grand Prix head honcho Sean Fitzgerald who has compiled the results for previous years and will figure out the scoring for these events.

This award was given for the most points from participation at the St Pat meet, SC Nationals at Georgia Tech, Classic City LC, Georgia Open Water, and St Nick SCM.

Congratulations to the following swimmers who won this award for their respective age group:

The 2008 Georiga Grand Prix awards were announced and given out at the St Patrick's Day meet in March. The award was given for best results by gender and age group in the following 2008 events:

Congratulations to these Grand Prix winners!