Georgia swimmers from GAJA amassed a total of 2,795.50 points to win the Regional Team

Other teams from Georgia competing in the "Local Team" category also made their mark:

she swam - including anchoring or leading off on several relays. 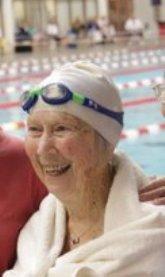 Another Georgia star turned out to be Britta O'Leary who swims for the Atlanta Water Jocks, but swam for GAJA at the Summer Nationals at Auburn. Not only did Britta go 5 for 5 taking Gold in all her events; but, she also broke the USMS record in the Womens 25-29  200M Breaststroke with a 2:42.96 breaking the old record of 2:45.04.

With 40 different GAJA swimmers  winning gold medals, the GAJA team won the team championship with more than a 1000 points more than the second highest scoring team .the  Sarasota Sharks which won the independent club category. GAJA had 52 relays that won medals and contributed 708 points including 10 gold medal squads.

Sabir Muhammad of Georgia, the lone DAQM.swimmer, was the fastest man in the pool winning the age 35-39 age 50 free in just under 24 seconds to break the Georgia record held by a J.Smith of SAMS.

GAJA had balance across all age groups with new young swimmers winning the Men’s 100 and Women’s 120 age free relay records and older swimmers winning five 320 age relays to establish the Georgia records in those events. The Men’s 100 relay of Kevin Cargill, Chris Dyer, Jon Gellin and Josh Smith were the  fastest relays in the pool and broke the oldest (and fastest ever) Georgia Men’s relay  record which was set back in June 1997. The Women’s 120 gold medal relay included Megan Harlow, Jackie Wilkes, Heidi Natkin and Susan Henson .Every GAJA women won a medal while a few men were unlucky due to untimely DQ’s.

There were bookend performances by older and younger gals as Betty Veater aged up into the 65-69 agree group and had a great meet with  5 individual event gold medals plus a relay gold while Britta O’Leary( 27 ) won 5 gold medals in heavy competition..

Meanwhile for the GAJA men, Josh Smith (24) , in his first Masters Meet, won the 50 free in just over 24 seconds and 2 other sprint  gold medals while teammate Kevin Cargill ( 25) also won 3 individual sprint gold’s. Together they set the Georgia records for the fast ever Georgia LCM freestyle sprint relay. They have committed to go to NC SCY Nationals in 2012 as has Sabir as part of GAJA.